Can CBD oil really help anxiety? Here’s everything you need to know

If, like me, you’ve seen the letters ‘CBD’ flying around a lot lately, you may be intrigued as to what it actually is. Is it cannabis? Is it good for you? Will it make you high? Is it legal in the UK?

CBD oil is a relatively new product to the high street health market, meaning the burning questions are coming in thick and fast. And what better way to find out all the answers than to take a trip to Celtic Wind Crops’ cannabis farm in County Louth, Ireland, where they grow hemp and manufacture the 5% strength CBD oil (and powder, and capsules) that has become the first CBD product to be sold in a UK Pharmacy (LloydsPharmacy).

Here’s everything I learned:

What is CBD oil and how is it linked to cannabis?

Okay, you’re about to hear a lot of science GCSE-type words like ‘compound’ here, but stick with me. CBD stands for cannabidiol, which is a compound (essentially, a natural ingredient) found in the hemp plant. Hemp is part of the same family of plants as cannabis, known as the cannabis sativa family, meaning hemp and cannabis contain many of the same compounds. CBD also exists in cannabis (otherwise known as marijuana), hence the link between the health product and the recreational drug, but you’ll find out below why hemp is the plant used to make CBD oil, and not cannabis.

CBD is a naturally occurring substance, and it has recently experienced a surge in popularity among the wellness community after becoming more widely available on the high street. It is not legal for companies who produce CBD oil to make specific claims about exactly what health benefits the product can have, but scientific research into CBD has indicated it’s got the potential to improve mental health issues including depression and anxiety, as well as providing relief from pain and other illnesses. 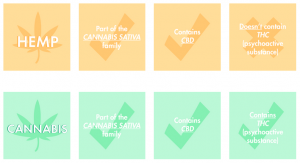 Will CBD oil make you high?

In short: no. Back to the science we go. The cannabis plant contains over a hundred compounds, or cannabinoids – many of which it shares with hemp. But the one compound they don’t have in common is THC (which stands for tetrahydrocannabinol, if you’re interested), because THC has been bred out of industrially-produced hemp.

THC is a psychoactive substance, meaning it’s the very thing that changes the chemistry in your brain to make you high when inhaling/consuming cannabis. That’s why hemp is used to create CBD oil instead of cannabis, because it won’t have the side effects of getting high (which, when being taken for medical purposes, is advisable to avoid due to risk of addiction).

Is CBD oil legal in the UK?

It is – conditionally. There’s a lot of confusion surrounding this, due to the fact that cannabis is classified as a controlled substance under the Misuse of Drugs Act. That legislation specifies that most cannabinoids (including THC) are illegal, but CBD is an exception to this.

Therefore, under the following conditions (which all CBD products being sold on the high street must adhere to), CBD is completely legal:

Medicinal cannabis, on the other hand, raises slightly different legal issues. While medicinal cannabis does contain the compound CBD, it also contains THC, the psychoactive substance that poses the legal problem. A recent change in the law means medicinal cannabis will soon be legally available in the UK, but only via prescription from a doctor. It has been found to be beneficial to patients living with MS, cancer, epilepsy and other serious illnesses. This recent development in the law edges the UK’s policy ever closer to the likes of Canada, Portugal, Holland, and many US states.

How is CBD oil made?

In many CBD oil products, you’ll see the word “extract” on the bottle. This means that the compound CBD had been scientifically extracted from the hemp plant – taken out of its natural environment – and placed into oil (usually coconut or olive oil). Maximum strength CBD oil products seen on the UK market are 5%, meaning you’re getting 5% CBD extract and 95% oil.

Celtic Wind Crops, whose farm I visited in Ireland, have a different method of creating their CBD products, however. Paul McCourt, the brainchild behind the company, believes it is far better to use the whole head of the hemp plant as opposed to extracting one tiny part of it (the CBD).

This is because hemp actually contains a whole host of other valuable properties – so it becomes a bit of a ‘buy one, get a ton of other stuff free’ type situation. In Celtic Wind Crops’ CBD oil, powder and capsules, users will benefit from an intake of amino acids, omegas, flavonoids, vitamins, minerals and more along with the desired CBD. Essentially, it could be all your food supplements rolled into one.

As mentioned above, legal restrictions mean companies selling CBD oil are not allowed to make direct health claims about it. Having said this, scientific research indicates that CBD could be beneficial to people with epilepsy, while other research has investigated how CBD’s properties could help acne, chronic pain, cancer, depression and anxiety. Celebrities in the US including Jennifer Aniston and Kristen Bell have both spoken publicly about taking CBD to help anxiety and stress.

CBD could be beneficial in people with

27-year-old Bekkii Spain from Sligo in Ireland told Cosmopolitan UK how taking CBD oil made an invaluable difference to her intense anxiety. She began having regular panic attacks back in 2015 due to an uncontrollable fear of her throat closing up. But with counselling being far in the horizon and prescribed medication failing to work for her, Bekkii’s anxiety only worsened, and eventually she was admitted to her local psychiatric hospital.

“I was there for two months – not because I had to, but because I was too scared to leave the building. I went from being an outgoing person to being scared of everything in a matter of months,” she told Cosmopolitan UK.

Eventually, Bekkii built up the confidence to leave the psychiatric unit, but still found it “close to impossible to lead a normal life” due to her anxiety. With treatment options narrowing, Bekkii began to research other ways she might be able to counter her anxiety, and stumbled upon a blog written by a woman who was using CBD oil for her mental health problems. Her mum had seen that a local pharmacy stocked CBD oil made by Celtic Wind Crops, and she decided to give it a try.

“The day I bought the Celtic Wind CBD oil I was reluctant to take it because my anxiety make me think about all the negative side effects something could possibly cause, like my throat closing,” Bekkii said.

“Later that day, I started building up to a panic attack. After taking the oil, the panic attack stopped in seconds. This had never happened me before. My panic attacks would usually build and build, until I had no control over my own body and felt helpless. For a natural product to stop that, I was so shocked I actually laughed.

“My panic attack stopped in seconds”

“At this stage, I had been dealing with this for two years and had never had a panic attack stop that quick, ever.”

Now, Bekkii continues to take CBD oil as and when she needs it. “Sometimes I am ok and might only take CBD oil once a week or less, and other weeks I may take one dropper every day,” she explained.

Knowing she has a treatment for her anxiety that works for her is incredibly reassuring for the 27-year-old, who told Cosmopolitan UK she feels “so positive about the future at the minute.

“It’s been a game-changer,” she said.

What is the best way to take CBD oil?

Most CBD oil will come with a pipette dropper, allowing you to put a few drops under your tongue. Do this, and hold the oil in your mouth for a short time to allow for absorption, before swallowing. CBD also comes in other forms including a powder to be added to smoothies or on porridge, or as capsules for those who don’t like the taste. (It’s said by some to have quite a strong peppery taste as it’s an entirely natural product.)

Where can you buy CBD oil?

Holland & Barrett was one of the first retailers on the British high street to stock cannabis oil, however LloydsPharmacy now also stocks it. They have chosen to stock Celtic Wind Crops due to the fact that the company grows the hemp and manufactures the product themselves (so it’s completely traceable) as well as the fact that their CBD products contain all the other added natural compounds within the hemp plant, which may yield added health benefits for users.

Can you overdose on CBD oil?

CBD oil will only be vegan if you can ensure the hemp plant has not been interfered with during farming with pesticides. That’s why it’s important to buy a brand that ensures complete traceability, meaning you can track the hemp that has been used in the creation of the product from seed to shelf.